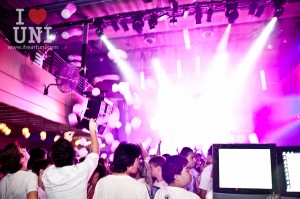 The annual I Heart Uni White Party went down last Friday 11th March. Students hailed from UNSW, USYD, UTS, UWS, Macquarie, the list goes on… and they made their way to Home Bar, Darling Harbour to do one thing – to have an awesome night.

Parties usually take an hour or two to get going, but the White Party bumped from the start. DJ Rusty kicked off the night with a blend of house and RnB. By 10pm there was a sea of white on the dance floor, people were not afraid to go up on stage and the atmosphere of the venue was electrifying. DJ Sefu and The Edge 96.1’s, Sugar Shane, rocked the crowd, which suited everyone just fine.

Following DJ Sefu were two guest acts, a short performance by The Wholesome Gentleman, with their unique swag, intrigued the crowd to a new style of Australian/Korean pop with their talented singing and rapping of Haru Haru by Big Band.

Secondly, there was Western Sydney rapper SYKO and Sony BMG’s DJ Timmy LALA who premiered SYKO’S new debut single “Come to party”. SYKO dominated the stage with his anomalous style of rapping, touching the heart of the crowd with his pumping lyrics.

The line outside was as big as it was at the start of the night and all three levels of Home Bar were packed out with students to the brim. The music was pumping, people danced with plenty of electrifying heated moments (yes we got you on camera!). Overall the White party was the best way for students to let off some steam before hitting the books, though when semester finishes the I Heart Uni Team will be ready for them.

Please note – Photos and Videos of the 2011 White Party can be found on our fanpage at www.facebook.com/iheartuni or on our photo albums right here at www.iheartuni.com

If you thought the party was awesome or was not to the standard you expected, we would love to hear why in the comments below.

One thought to “The White Party – Highlights”